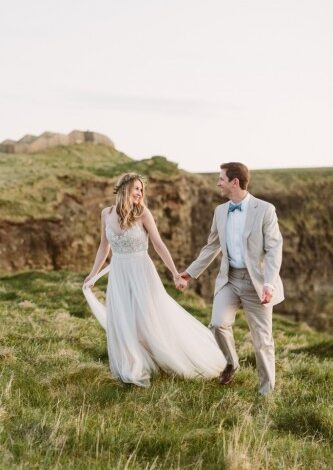 Wedding Traditions From Around The World

For most of us our wedding day will be full of traditions, be they family traditions or more general wedding rituals. Even if you want to shun the entire idea of a traditional wedding day, it will still be steeped in well rooted rites whether you realise it or not. Such as the father of the bride walking the bride down the aisle, the ‘something old, something new, something borrowed and something blue,’ the bouquet toss and even the first dance are all from very old traditions. But these are just some of the wedding traditions that we might be familiar with in this country.

Indeed, there are many fascinating and amazing wedding traditions from different parts of the world which are both beautiful and intriguing. From releasing doves in the Philippines, to ‘ransoming’ the bride in Romania, to kissing the groom every time the bride leaves the room in Sweden, the world is full of fantastic wedding traditions.

And there’s nothing to stop you incorporating some of these ideas into your wedding day too and effectively start your own new family traditions.

Here’s a look at 10 wedding rituals from around the world. If you’d like to chat about any aspect of your wedding décor or planning, please don’t hesitate to get in touch with me directly.

Australia
An Australian wedding ceremony often features the tradition of a unity bowl. Guests are given stones and asked to hold them during the ceremony. At the end, guests place the stones in a decorative bowl that the couple will keep and display afterwards to remind them of the support and presence of their friends and family.

India
Indian weddings have many beautiful traditions but on the wedding day, the bride and groom put flower garlands around each other’s necks in the Var Mala Ceremony to show the bride has accepted the groom as her husband.

France
The French are known for their fantastic pastries so it’s no surprise that for their weddings they often serve a croquembouche – a mighty tower of cream-filled profiteroles that can be dipped in any number of sweet sauces, as the wedding cake. A croquembouche can be decorated with fruit, nuts, and glazes, and makes a fantastic centrepiece.

Germany
After getting married, couples in Germany are presented with a large log and a saw and have to get to work. By sawing the log in half, it is believed they are proving their ability to work together in overcoming obstacles.

Peru
In Peru charms are attached to ribbons and are tucked between layers of the wedding cake. Each woman grabs a ribbon and pulls. At the end of one ribbon is a fake wedding ring. Whomever receives the ring is said to be next in line for marriage, a bit like throwing the bouquet!

Japan
Japanese weddings are generally full of Shinto traditions and to symbolise their union, the new couple drinks sake together, becoming husband and wife once they take the first sip.

Philippines
At traditional Filipino wedding receptions, the bride and groom release two white doves to represent a long, peaceful, and harmonious life together.

Jewish
While standing under the Chuppa, a canopy meant to provide sanctuary from evil spirits, the groom stands on a glass wrapped in cloth to symbolise the destruction of the Holy Temple in Jerusalem.

Norway
The wedding cake, also known as kransekake, at a Norwegian wedding isn’t a traditional cake. It is made of bread and topped with a mixture of cheese, cream and syrup. The dessert is then folded over and cut into small squares.